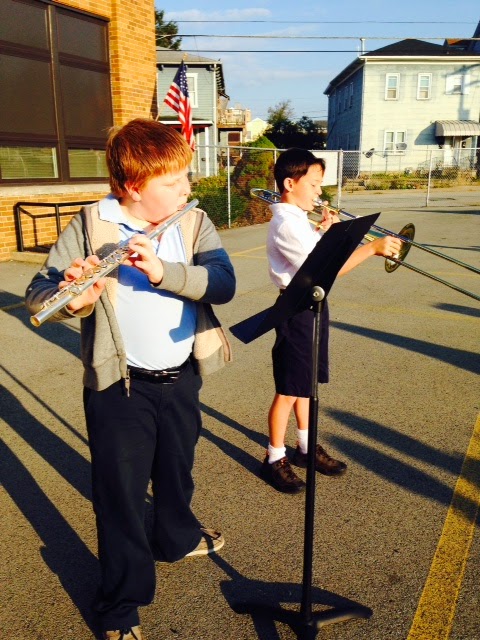 ~~ONE~~
Another great photo of Isaac at school. I think the kid on the flute is one of his friends, but since Isaac shares next to nothing about school except the occasional, "It's good. I like it. Yup, I have friends," I can't really be sure.
~~TWO~~
Isaac has only one more week to sell like a million lottery tickets for his school fundraiser. If you are interested, please let me know. They are $20 each.
~~THREE~~
Malcolm has a cold, which considering how many kids he is exposed to during the week, I am not really surprised. He's too cute because he comes to me and says, "Oh man! My nose is stuck again!"
~~FOUR~~
Malcolm no longer calls Margaret "Mimi." He now says "Margaret." If you refer to Margaret as Mimi, he will correct you. Sigh.
~~FIVE~~
Henry's still in speech therapy and I think things are going well. Since I didn't notice his lisp and had to have a friend point it out, I am really not the best judge of these things.
~~SIX~~
LMCA now qualifies for Box Tops. So please save them and let me know and I will send you postage. Our goal for the year is $1000, which would be a-m-a-z-ing!
Have a great weekend everyone! 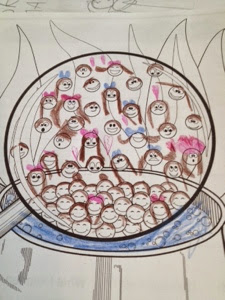 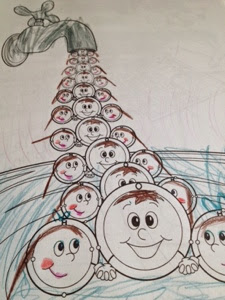 And they've all become her friends.
Posted by Modest Mama at 9:42 AM No comments: 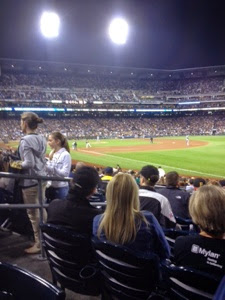 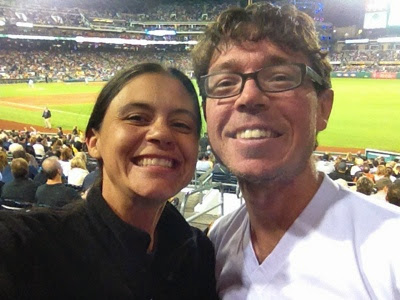 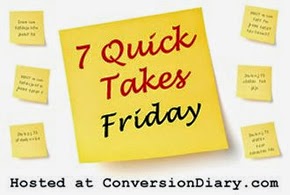 ~~One~~
Malcolm started Step Up last week. He is my only one doing the program.
~~TWO~~
The biggest thing is, despite my best efforts, the kid still isn't potty-trained. There might actually be some other issue going on here. We've moved beyond parental laziness to "What the heck?"
~~THREE~~
Thankfully, at Step-Up Michael is in his office two floors up so if Malcolm does need a change, he can get down there ASAP.
~~FOUR~~
My kids all hold their pencils wrong to write. They use their right hand, but hold their pencils like a lefty. I have tried to break them of this and have never succeeded. Michael does the same thing so maybe it's a losing battle.
~~FIVE~~
Margaret has decided that all my spider plants are girls. Because, hey, they are.
~~SIX~~
Speaking of Margaret, she told me yesterday that I am drunk a lot at school, but that's okay, no one minds. When I asked her why she thought this, she said because we often stop at the gas station to get my drink on the way. Ah-ha.
~~SEVEN~~
Do you own this amazing toy? 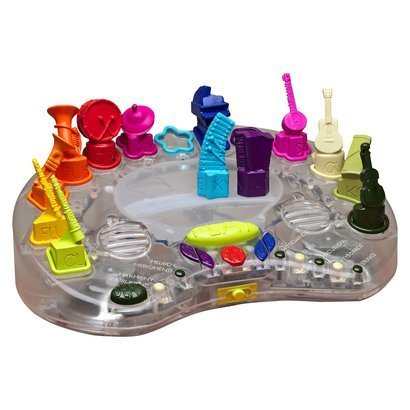 If we could only own two toys, this would be number two. It is without a doubt one of the best toy investments we have ever made. It's probably best for the under 5 crowd, but even the older boys will sit and mess around on it. Amazon has it for under $50 right now. I am not getting anything for promoting this item. It's just that awesome.
Number one toy of course would be Legos. Of course.
Check out more thoughts over at Conversion Diary and The Pebble Pond. 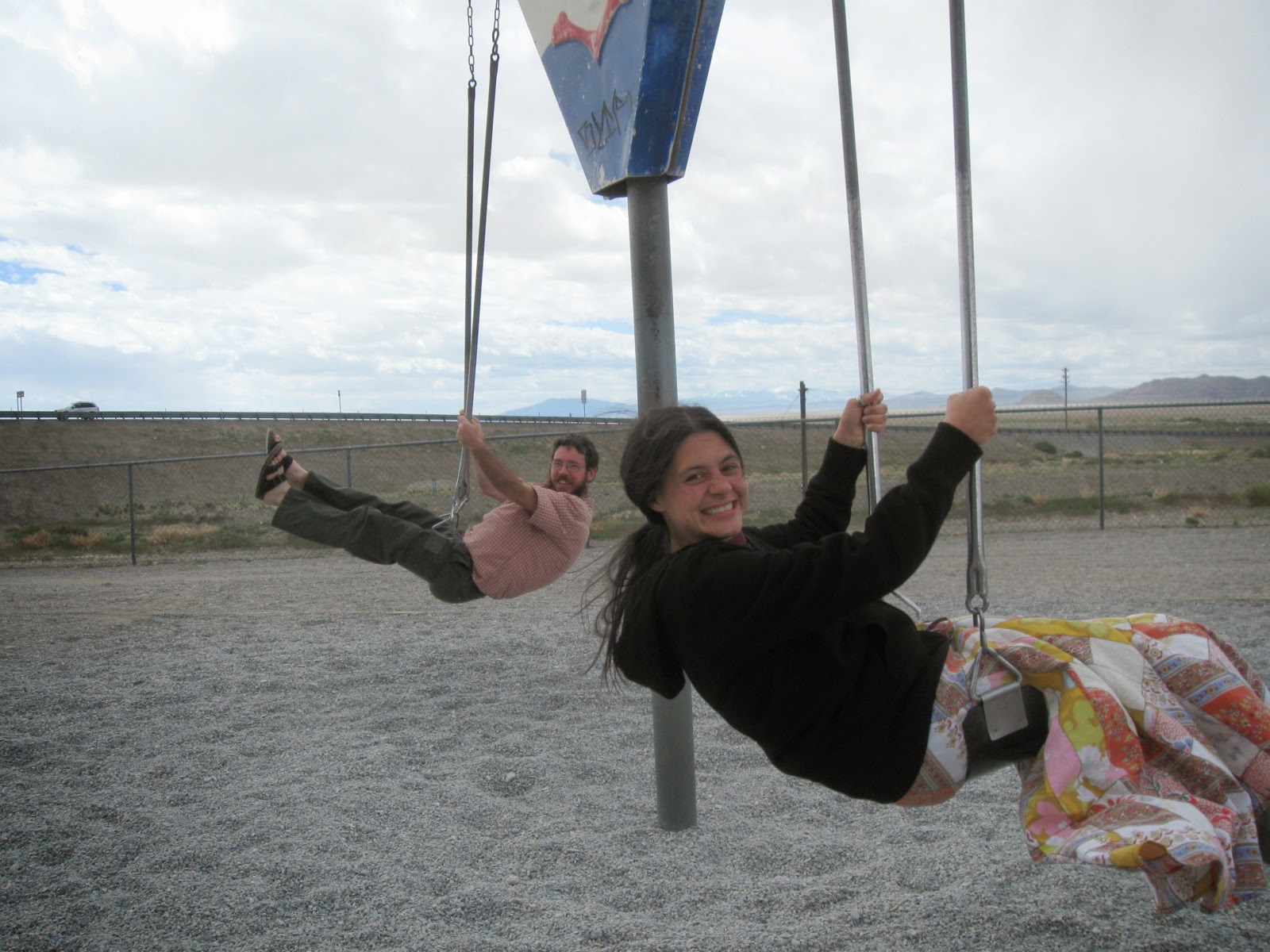 Posted by Modest Mama at 7:33 AM No comments:

1. I wish I had a bunch of powerful and moving thoughts to share with you this week, but hey, I'm all out. My life is busy and truthfully, probably isn't that interesting to those outside of my house.
2. LMCA is going smoothly. My kids are loving it and that makes all the work it takes a little easier to manage.
3. We have a Saturday at home and besides lesson planning and facebook trolling I am putting up some freezer meals for this Fall. Michael is making lard. Fun times.
4. This picture popped up on our screen saver this morning and it so perfectly describes my life right now that I don't need to post another word about it: 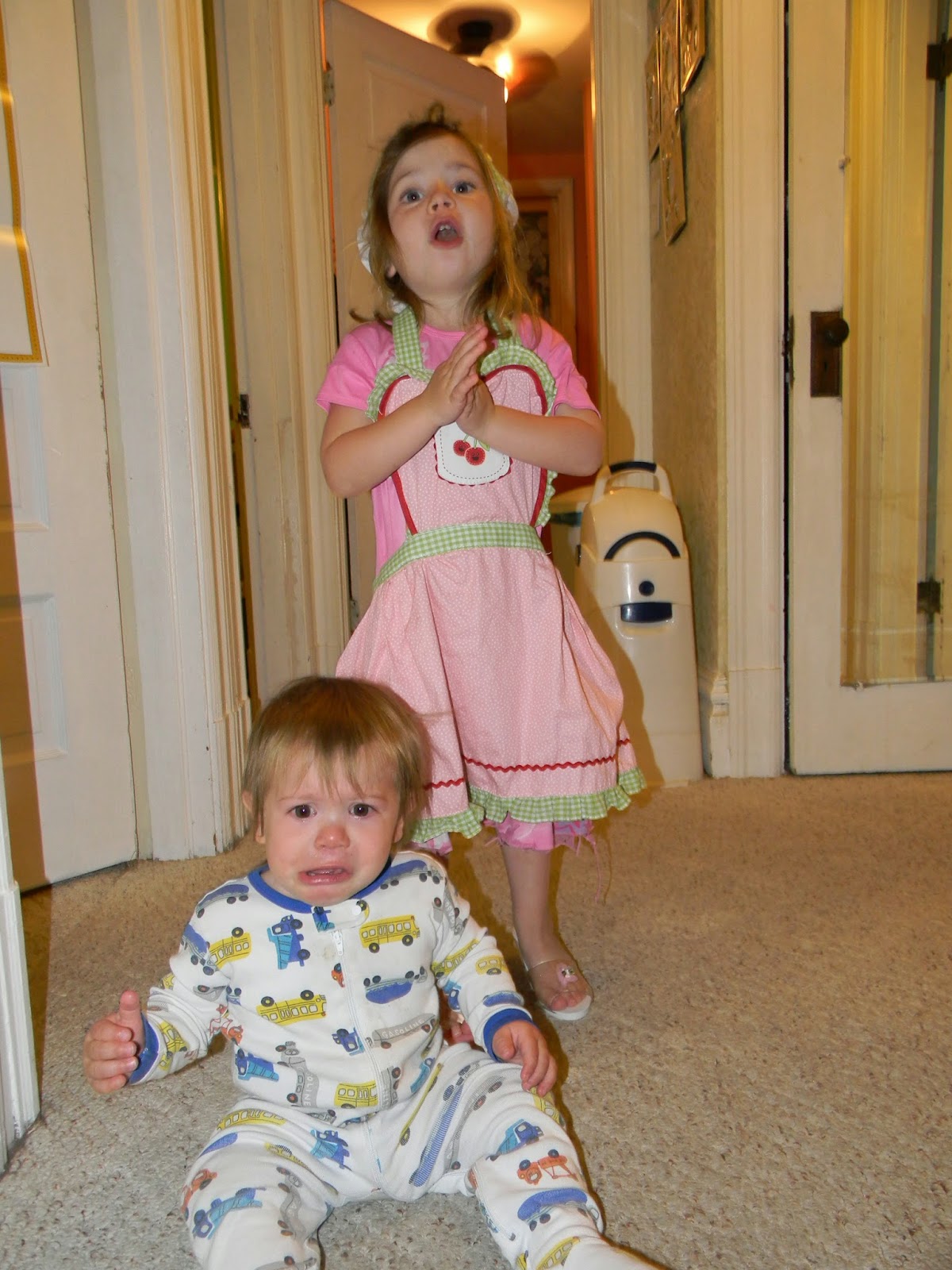 April 2012
5. I have a friend in labor with her sixth boy. That's right. She is about to join the half-dozen boys club! Totally awesome.
6. Speaking of babies, I got to hold a 24 hour old newborn on Thursday. Outside of graduate school when we got to do newborn assessments in the hospital, I think that she was the youngest baby (outside of my own) that I have held. She was so precious.
7. Folks often ask, but we have no new adoption news. We are still waiting for the perfect daughter to join our family. She'll come on her own time.
﻿
Posted by Modest Mama at 2:59 PM No comments: 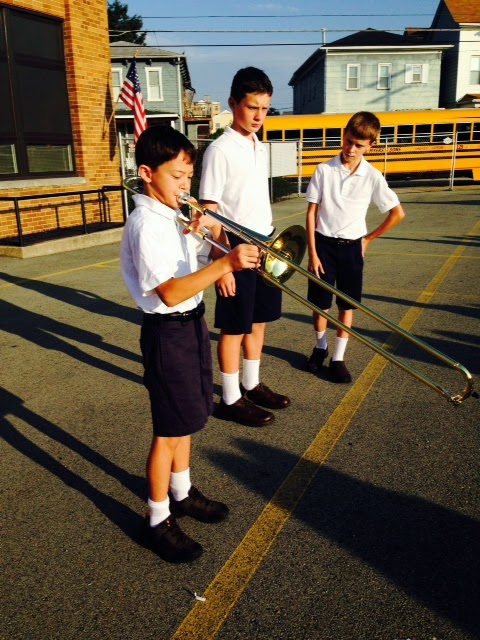 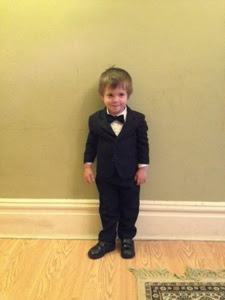 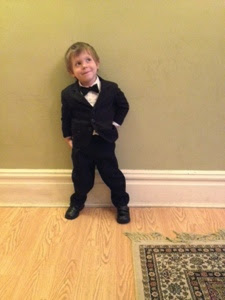 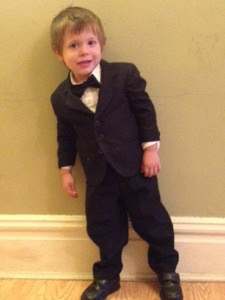 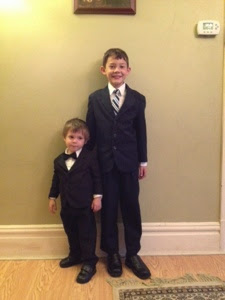 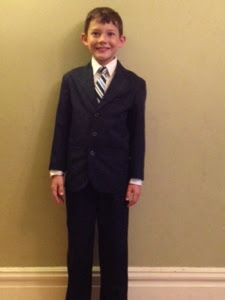 Posted by Modest Mama at 7:14 PM No comments: 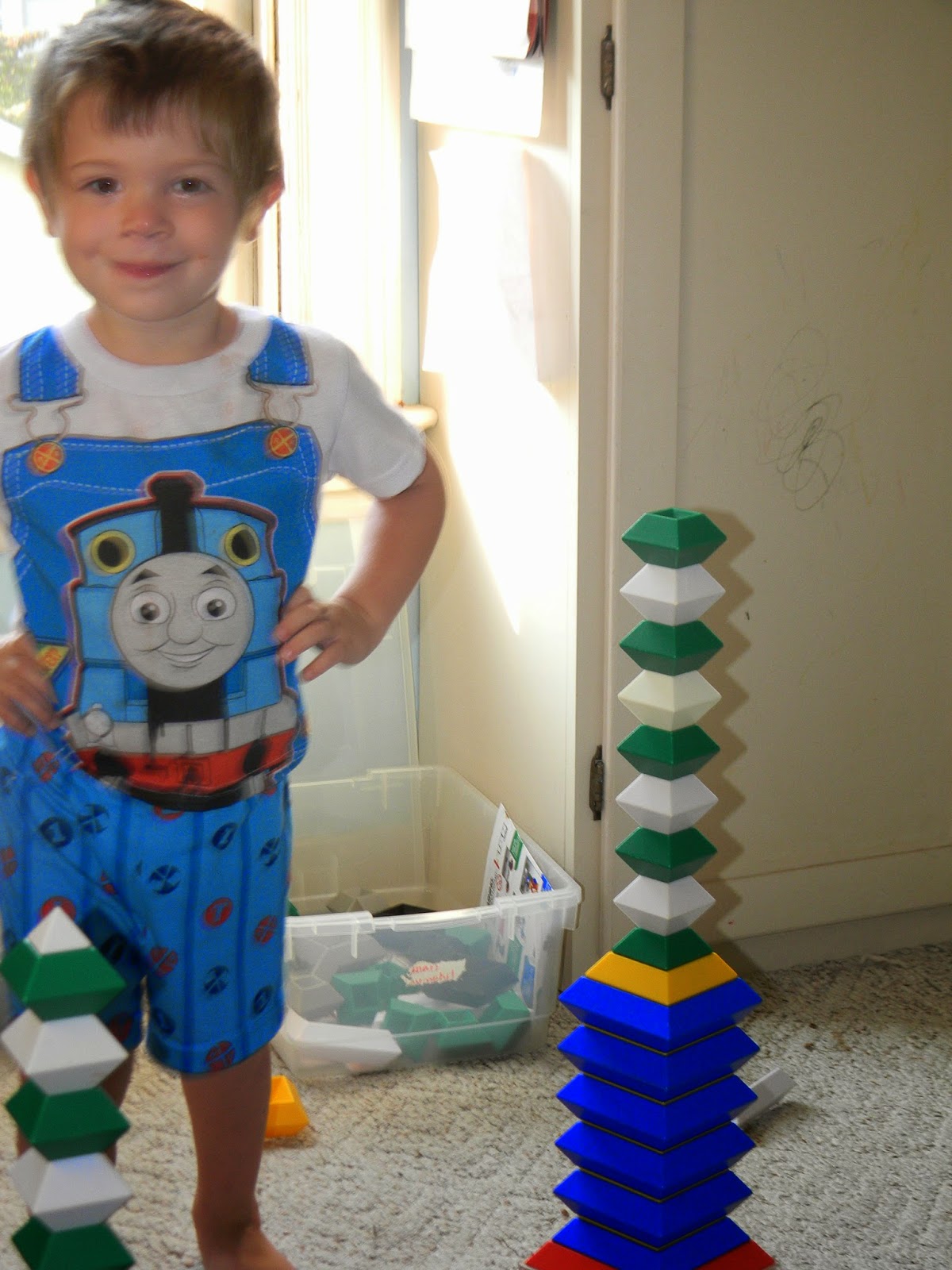 A little blurry, but you can definitely see how much pride he has in his work.
1. LMCA started this week with almost double the number of students we had from last year and more than double the number of teachers.
2. We are still renting the same space, although it is a little more snug than last year. Somehow we will make it work.
3. First days are just that: First. More kids, more teachers, but we are figuring it out.
4. One of the moms at LMCA was saying how she was raving about our program to a relative in Connecticut, and the relative liked the sound of our program so much that she looked for something similar in her area. She found Regina Caeli Academy, which is a program led by one of my friends from Atlanta. What a small world!
5. Soccer games start this weekend.
6. You ever get that feeling like one more thing and you're going to lose it? Yeah, me either.
7. Congrats to my niece on choosing a new major. College is such an exciting time. 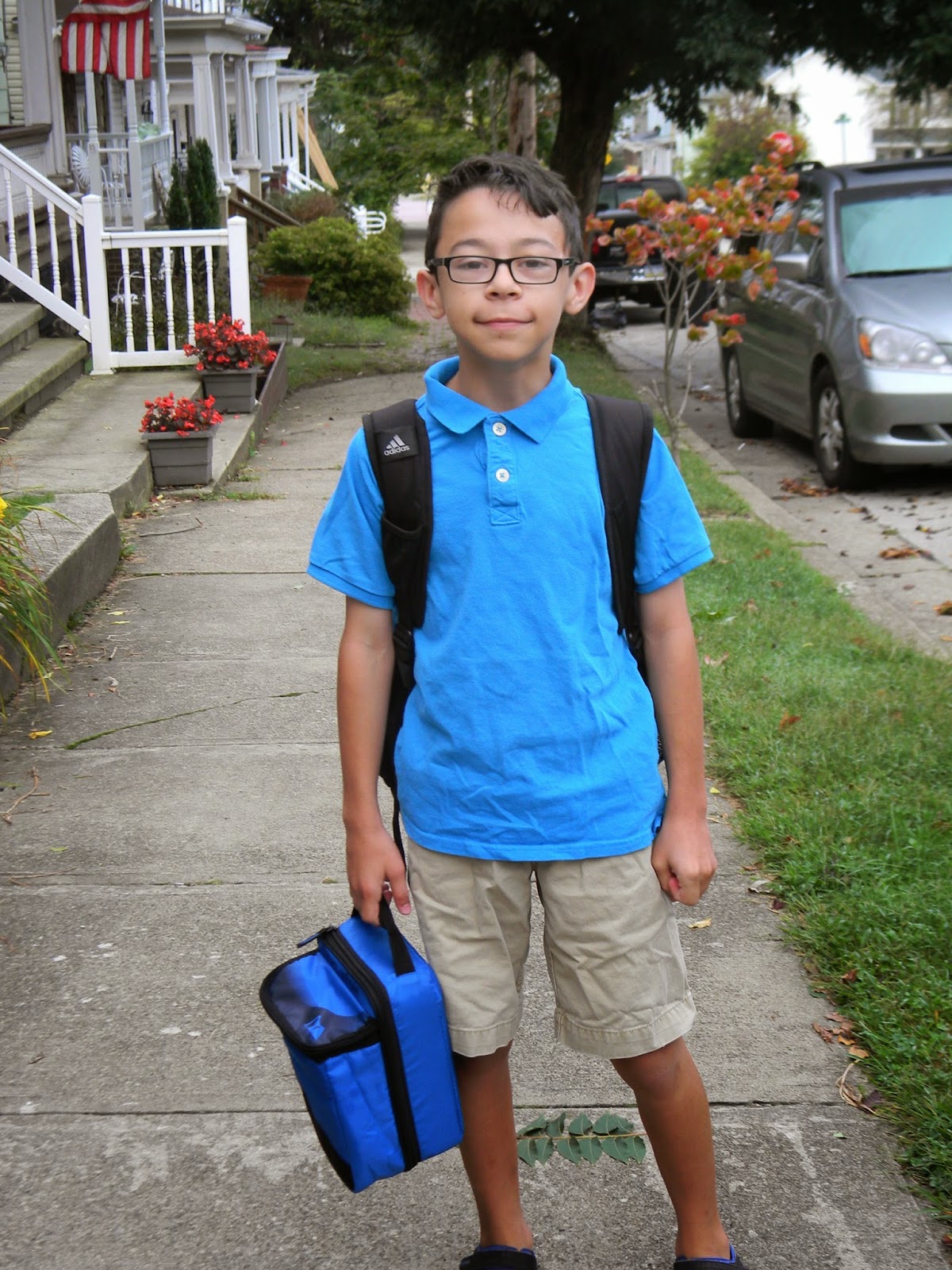 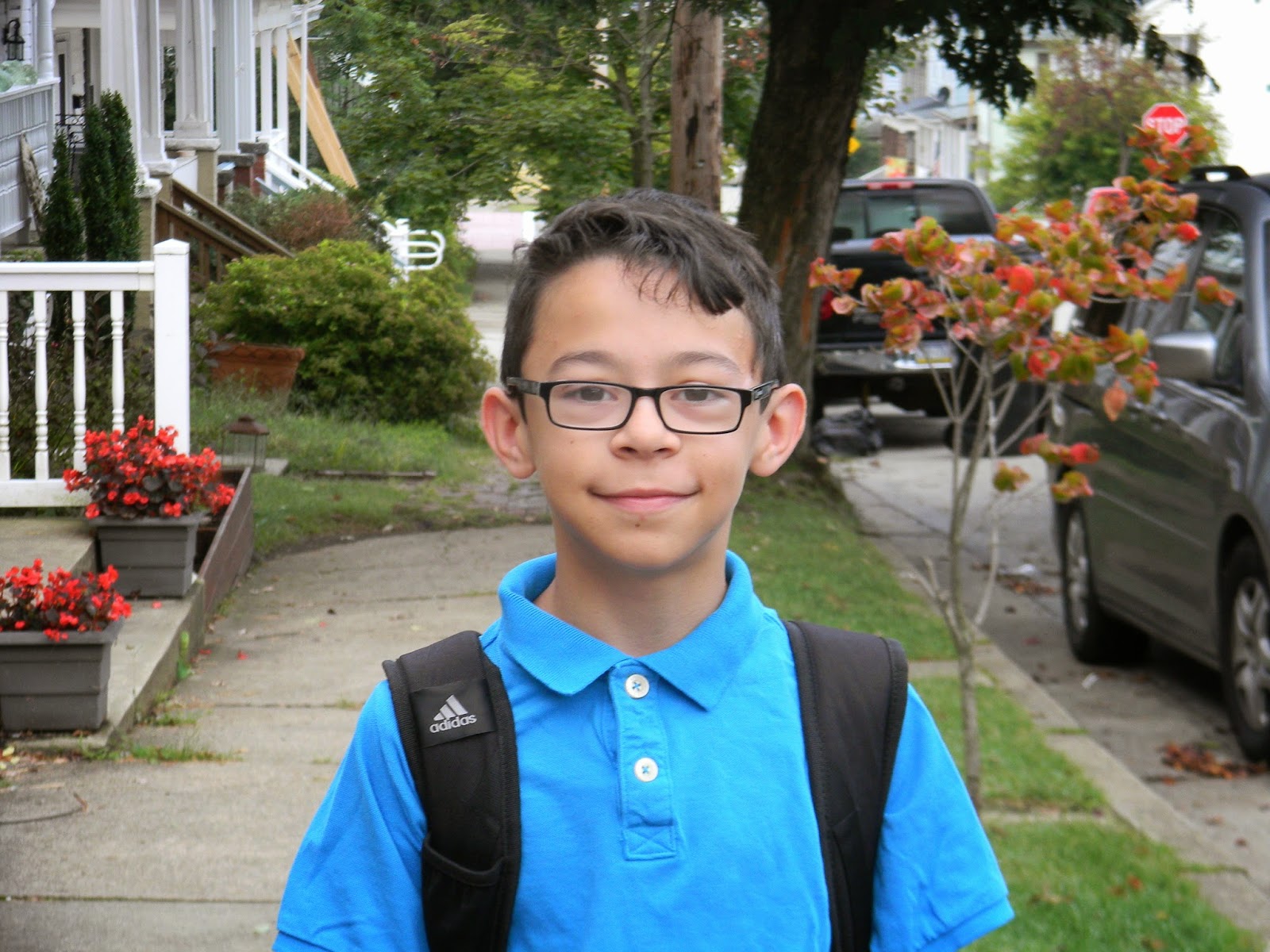 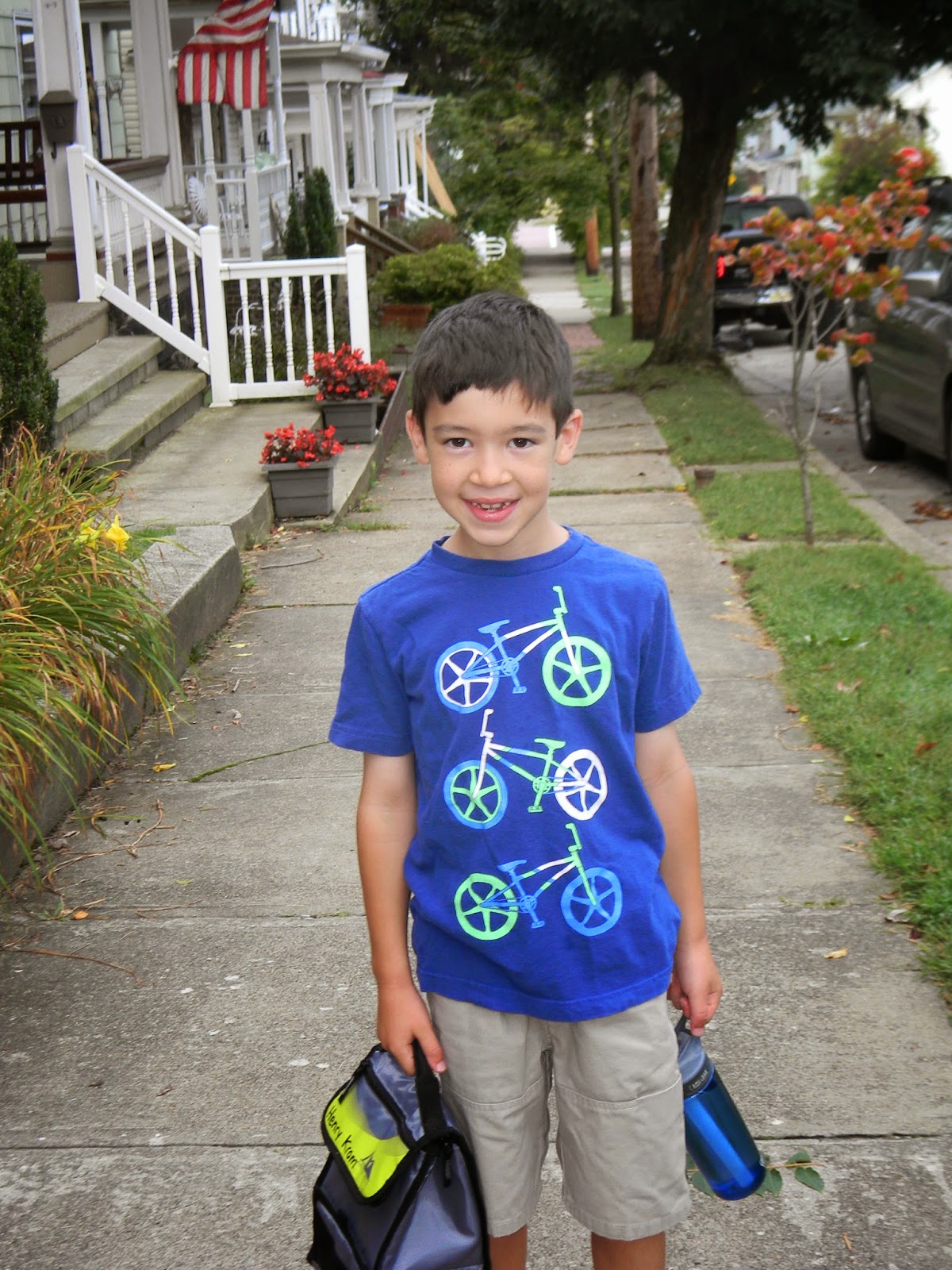 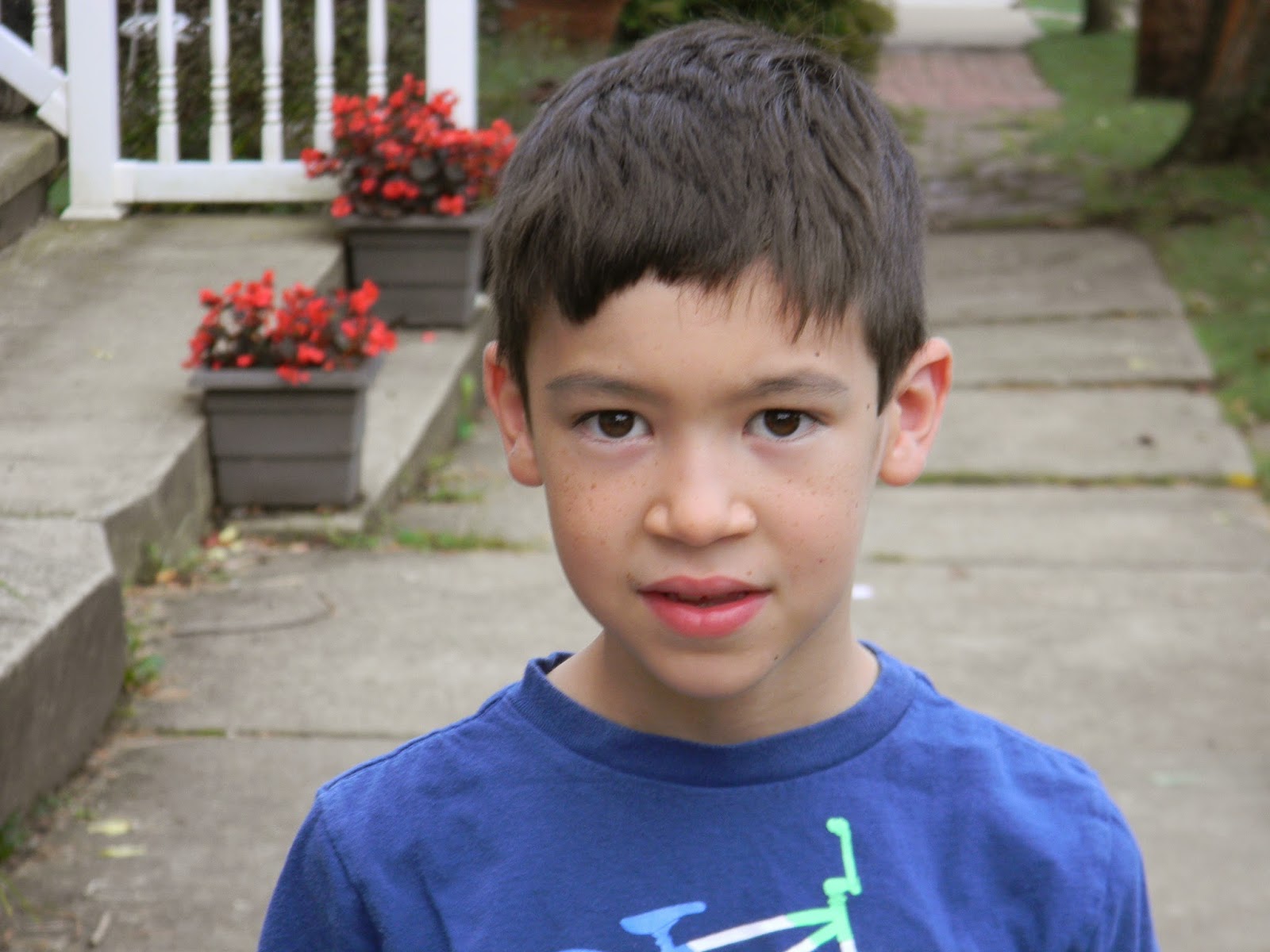 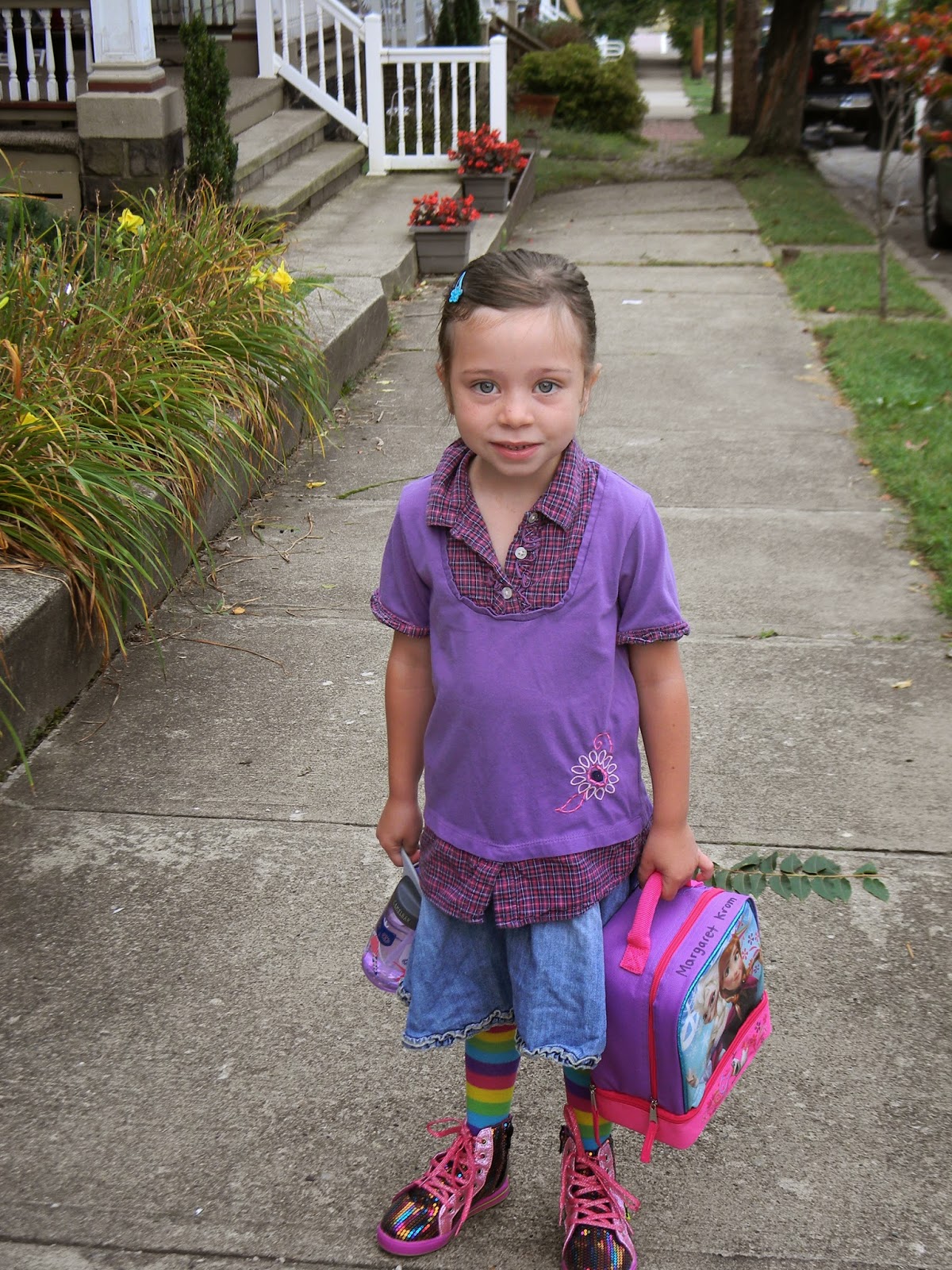 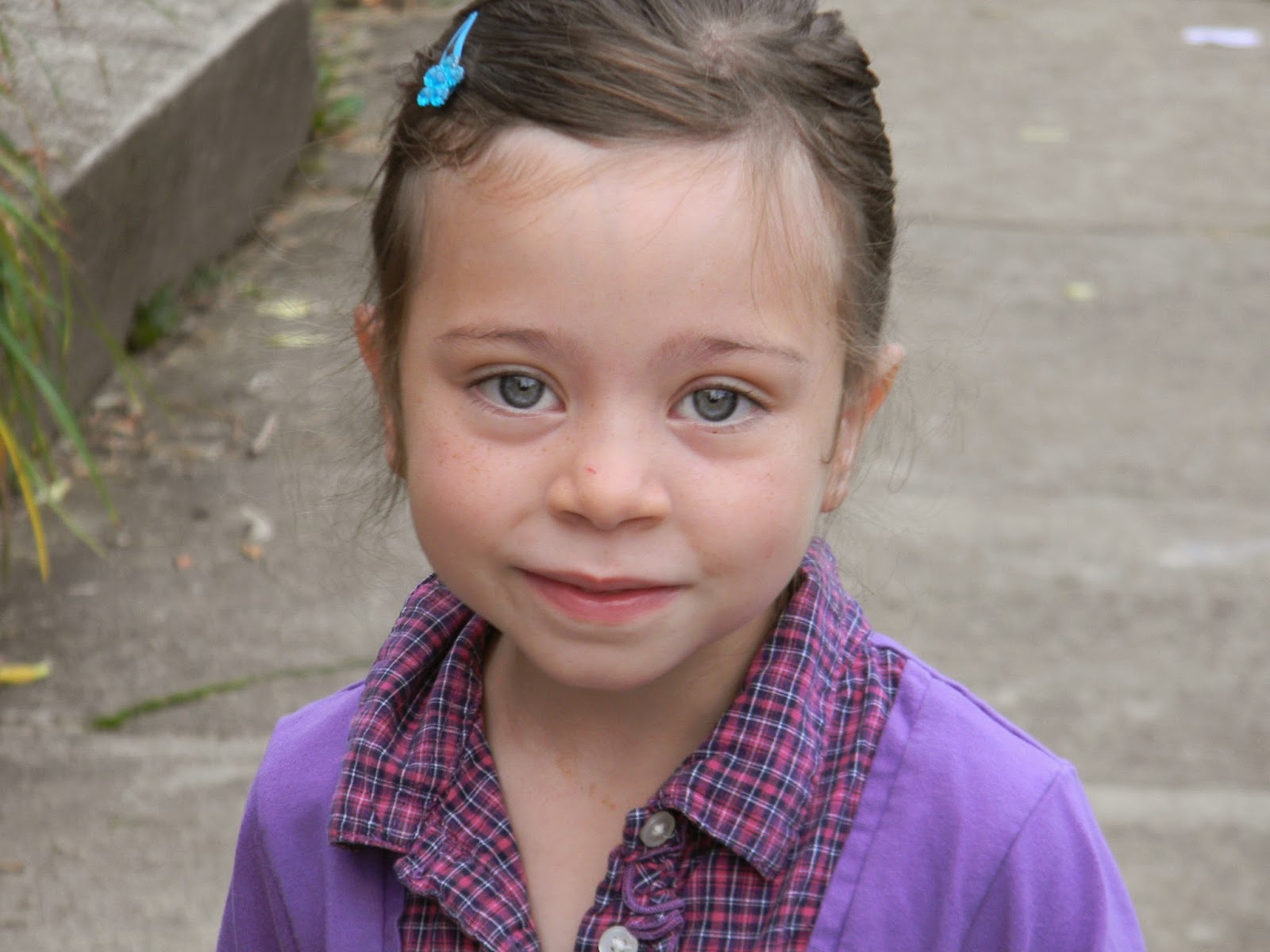 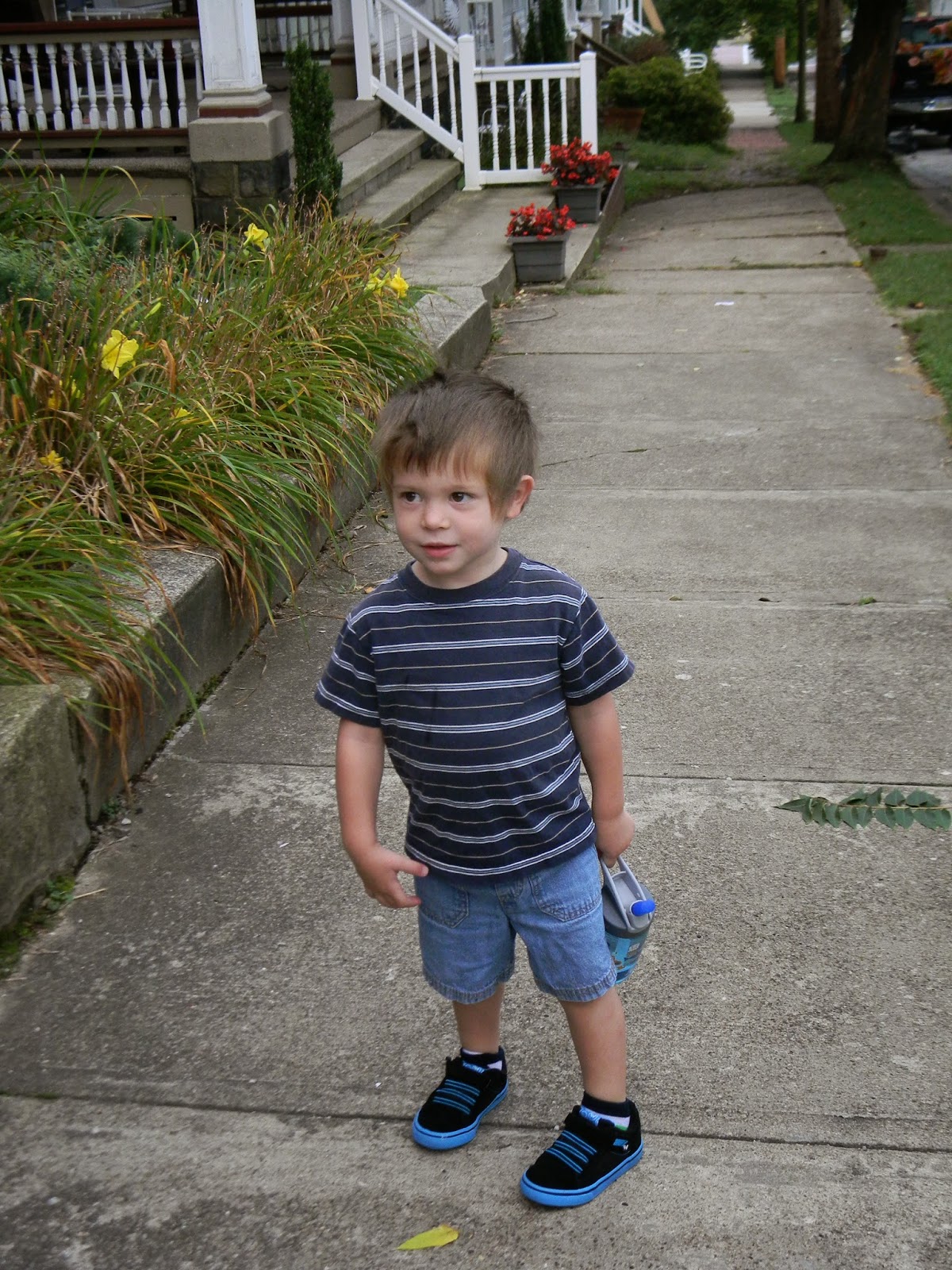 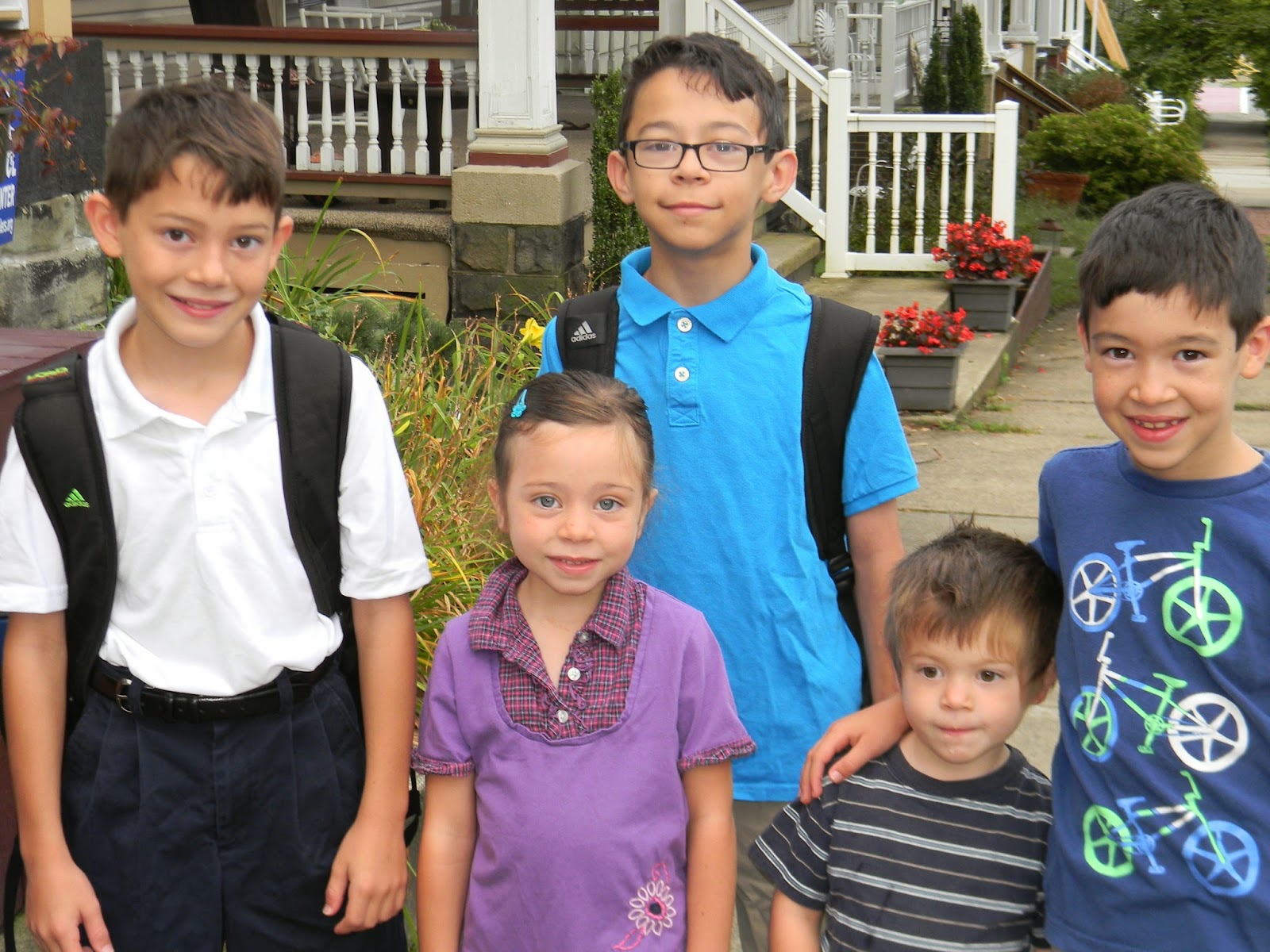 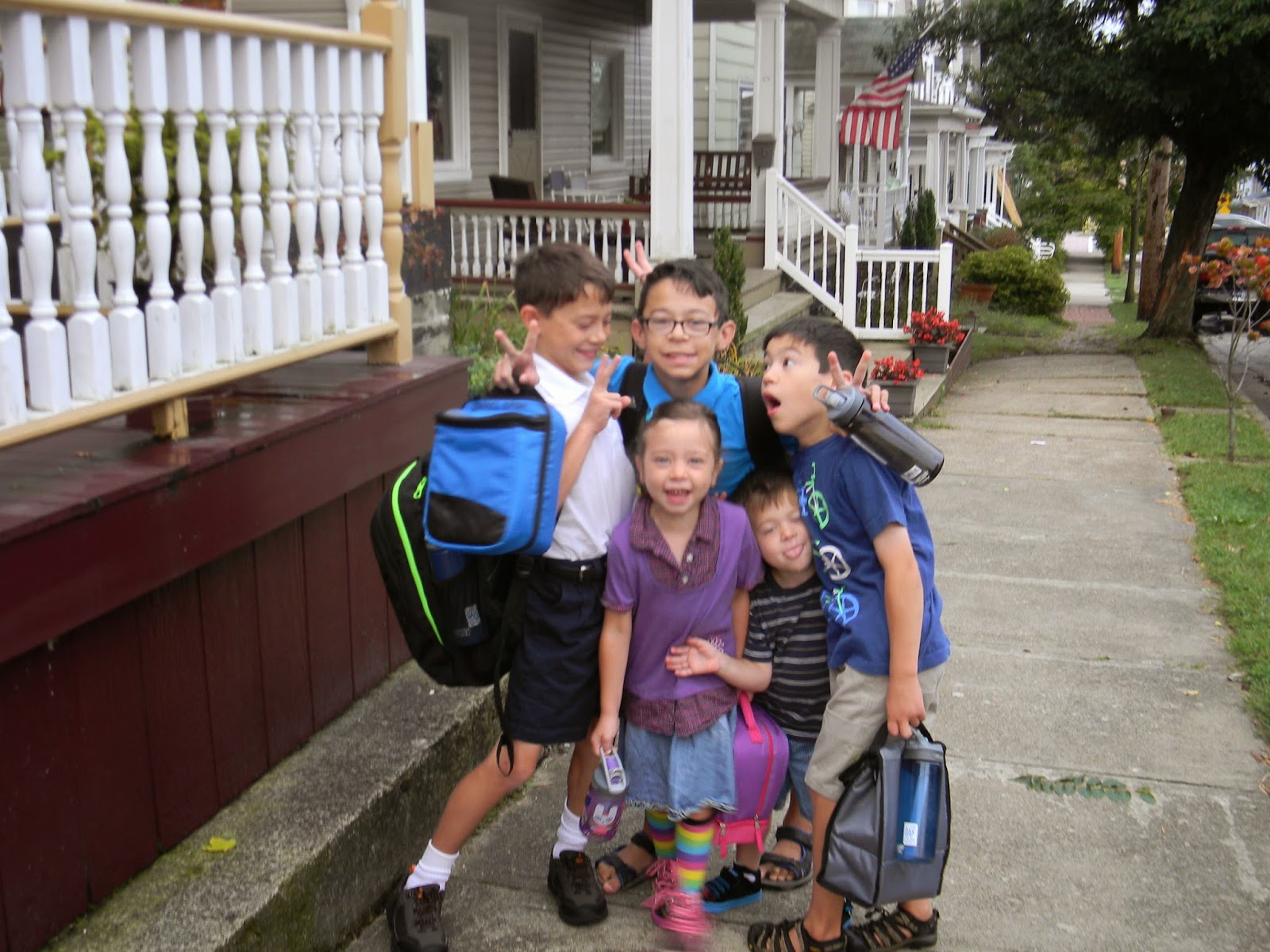