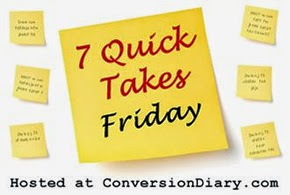 ~~ONE~~
We had our first Open House of 2014 for LMCA and it was a HUGE success! We already have two new registered families!!! Yeah!
~~TWO~~
If you haven't already, check out our new website: http://www.lmca-homeschoolers.org/
~~THREE~~
Soccer started this week. We are so blessed this season to have practice for U12 and U10 on the same days! So that means we only have soccer three days a week instead of five!
~~FOUR~~
Soccer was actually delayed a week because of snow, so that means that games start right away. I think I am going to dread spending my Sunday afternoons all over Western PA at soccer games, but it actually turns out to be a nice way to spend quality time with the kids.
~~FIVE~~
So back to LMCA, next year we are studying Early Modern History (1600 to 1850). I said I would have the book lists finalized by April 15, but I am having a heck of a time with the literature books. I want them to link to the historical time period, but there are just so many good choices! Any suggestions? I'd love to hear any you have for grades 2 to 9.
~~SIX~~
Can you believe that Easter is two weeks from Sunday? Awesome!
~~SEVEN~~
As you clean out for Easter, remember the LMCA rummage sale in Mid-May. I can come and pick up any items you would like to donate. As long as you aren't in Oregon or somewhere else that is not here.
Check out more over at Conversion Diary or The Pebble Pond.
Posted by Modest Mama at 11:12 AM

Hi Jessica! How about for early modern American history books: The Secret Soldier, The Sign of the Beqver, By the Greqt Horn Spoon, Riding Freedom, any Little House on the Prairie books. For more suggestions, check out www.sonlight.com, www.heartofdakota.com, and www.winterpromise.com. Hope this helps!
Bridget (I'm signing here as I can't seem to log into my google account).