7 Quick Takes, 5 of those random 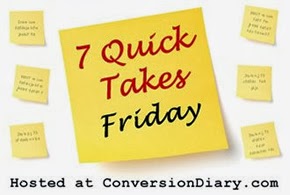 ~~ONE~~
Funny how the first time when the weather gets really cold and yucky everything gets cancelled and we all hunker down for THE BIG ONE!
~~TWO~~
Now we are in round two and I think this is worse because it is coupled with this blistery snow that stings your face and turns ever horizontal surface into an ice rink.
~~THREE~~
So round two of winter is here and it's just business as usual. By this time everyone is just thinking, "Been there, done that," and "Enough already!"
~~FOUR~~
Isaac's school has been delayed a few times, but thankfully they haven't called off again yet. I don't know what the deal is, but as far as I can tell, the schools have snow days every year. Somehow though, the person making the school calendar neglects this fact and doesn't work any extra days into the year for this. Gone now is President's Day and I think a day at Easter/Spring Break (which I might add, is not a glorious week like we had as kids).
~~FIVE~~
All you homeschoolers are probably thinking, "This is why we homeschool!" and my homeschooled kids are relieved because they know when the sun comes and the heat bears down the school room becomes the library and drawing room for the season.
~~SIX~~
But those that have had the good fortune to be around Isaac since he started school know what an amazing change the boy has gone through and how this has been nothing but awesome for him and for us as a family. Hard at times, and man do I miss my boy during the day. But even I can't deny the positive from this.
~~SEVEN~~
Year by year. Child by child. There is no shame doing what's best for your child.
Check out more at Conversion Diary and The Pebble Pond

Agh! I grew up in South Dakota and we spent most of our married lives up north, so I remember that feeling of being iced in/snowed in for what felt like forever!

Now we're in Texas, and we just have to laugh when the radio announcer talks about temperatures plummeting down to the 40s or when the homeschool co-op kids don't play outside because the temperatures are "cold". :) I guess it's all relative. Have a great weekend!! Gwen

I am not usually one to complain about the weather but I am so OVER this cold. I want to get outside and play! I just let the dog outside a few minutes ago and the wind whipped through the door. Goodness its cold!

I'm glad I came upon your blog for the Random 5. I just saw you have mixed schools. homeschool/public school. We are this way for the 1st time this year because homeschooling wasn't working for my oldest son, now a freshman at the local high school and I homeschool my youngest son. I look forward to following your blog :) thanks for posting.