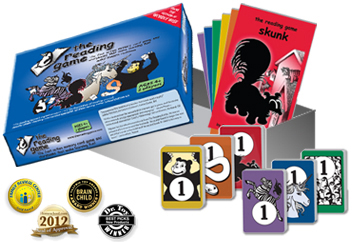 There are many products on the market today under the disguise of games intended to teach children to read. Many make claims that children will be reading at young ages, or reading at high levels quickly. Sometimes these games help children excel at reading, but more often than not, these products fall short in the eyes of the consumer. I was fortunate enough to be able to review one such item that not only met but also exceeded my expectations for a game designed to teach beginning reading skills.
The Reading Game is a fast-action memory card game that teaches 180 commonly used words over the course of six different levels. Each level is broken down into easily managed "chunks" of word learning. Upon the completion of each level, the child is able to read a storybook that utilizes the information learned.


We received the game and the boys were eager to play. Since Isaac is already reading above the level of the game, he was able to be the "tutor" for Henry. Isaac's role was to support Henry in his play by modeling the method. If you've ever played a matching memory game with your child, then know that this isn't much different. Cards were laid out and the boys took turns flipping them over and trying to make matches. Each card has a word and the boys would say the word aloud. When all the matches were made, more cards were added the game was played again. Since Henry has some reading knowledge, the entire Level 1 was completed in under an hour. Isaac moved on to another activity, but Henry, after reading the book, declared he was going to play again by himself. He repeated the entire Level 1 game alone.


I was very surprised how engaged Henry was in this game. This is the child that rushes through his schoolwork so he can get upstairs to play and listen to books on tape. He rarely takes time to do anything "school-related." He clearly saw this as a "game" and it kept his attention for almost two hours the first day. Later in the week he came to me with a library book and showed me several words that we in "his schoolwork game."

I was also impressed with the simplicity of the game. There are a lot of cards, and the readers, but there are no tiny pieces to lose or game boards to set up. No annoying voices repeating letter sounds again and again. The same method is repeated for all the levels. Isaac at age seven enjoyed playing the game, as did Henry, age five. Margaret could even manage this game. At almost four, she wouldn't be able to read the words, but if she played with an older child she could easily make the matching and begin to internalize early reading skills.

Sight word learning is very important, but does not replace phonetic instruction. This game is not intended to be used as a stand-alone curriculum, but makes an excellent supplement to any reading instruction. It would make an excellent educational holiday gift.
WHAT DID MY PRODUCT TESTERS THINK?


<><>
The Reading Game retails for $24.95 and can be purchased from The Reading Game Website. The set includes six illustrated storybooks, six decks of matching playing cards, and a teacher/parent handbook.
Disclaimer: As a member of the TOS Homeschool Review group, I received this product free of charge in exchange for an honest review on this blog. I received no other compensation. ﻿
Posted by Modest Mama at 7:00 AM