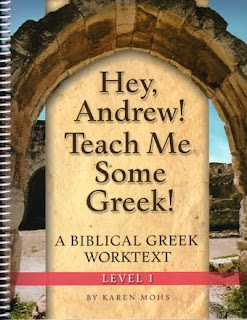 Hey, Andrew! Teach Me Some Greek! is a language program that teaches eager young learners the fundamentals of the Greek language. This is not a program to learn modern Greek (the language they speak in Greece today). Rather, this program teaches "Koiné" Greek which is the language of the Bible's New Testament. God caused the biblical writers to use the everyday terminology of their time, spoken in the streets and in the marketplaces, so people could clearly understand His message to mankind.

I used the Level 1 Workbook over the course of the entire school year with both my 7 year-old and my 9 year-old. The program worked well with both of them - by the end of the year they both have mastered the entire Greek alphabet (okay, the 7 year-old needs a little help). Further, since this does not assume that the teacher knows Greek, teacher and student can learn together.

Now, the objective is limited to learning lowercase characters, so the kids would have quite a ways to go from here. But, it is a good start and an easy introduction to learning Greek. For the record, I taught the kids uppercase characters when they learned the lowercase. I didn't see any reason not to teach this, especially since the uppercase characters are often very similar to the lowercase or even identical to Arabic characters. Uppercase alpha, for example, is 'A'. I don't know why they did not include this in the program, though they are included in the back of the book for those who want to cover them.

Further, I did not use the exercises included with each lesson, not because there was anything wrong with them, but because I came up with my own. Finally, this program does not teach any words, but it does include a pronunciation guide in the back and so I would put English words into Greek characters and have the kids figure them out. They really enjoyed this, and liked putting words into Greek characters themselves.
I found this program to be very inexpensive considering the fact that we used it for an entire school year. The Student Workbook is only $14.95, and you can add on supplemental materials for as low as $2.95 an item. As the levels increase in difficulty the prices raise slightly; Level Eight Workbook is priced at $28.95 and all the other levels priced between the two. The company also offers "Starter Sets" and "Complete Sets" which range in price from $86.85 to $500.00. In addition to the Greek program I received, the company offers many other products. You can purchase a Latin program or a Bible Study program as well.

Overall, I feel that the program I received, the Level 1 of the Greek Program, was a wonderful addition to our homeschool curriculum this year. Although the company recommends that children start in the higher levels (usually Level 2 or 3), I found that Level 1 offered us just enough exposure so that we could decide if #1: Studying Greek "fit" into our homeschool day, and #2: If we liked the Greek 'n' Stuff program enough to continue using it. The financial commitment was minimal and I feel like we really got a lot out of our year-long study of the Greek alphabet.

Disclaimer: As a member of the TOS Homeschool curriculum review group, I received a free copy of the Greek 'n' Stuff program (Level 1) in exchange for a review on this blog. I received no other compensation.
Posted by Modest Mama at 4:47 AM