Our week in review

This week started out well, but didn't end as well.
Monday we had a great school day and lots of errand running. Blah. I can't stand running errands.
Tuesday the weather was yucky and co-op was cancelled. This turned out to be a good thing since Henry spiked a fever around 3pm without any previous symptoms. You should have seen this kid at lunch that day! We are talking three quesadillas, fruit, cookies, lemonade. At three when he started complining of feeling poorly I thought it was his overeating that was catching up with him. He continued to have a fever on and off through Wednesday.
Since kid illness kept me from being able to attend my weekly sewing group, I ran out to the thirft store for an hour on Wednesday afternoon when Mike got home. I try to get to the thirft store on Wednesdays because it is half-price clothes day. This time I scored more than clothes when I found this: 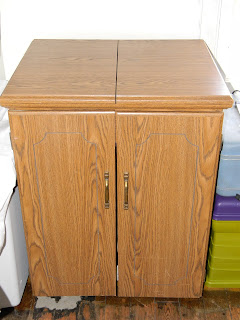 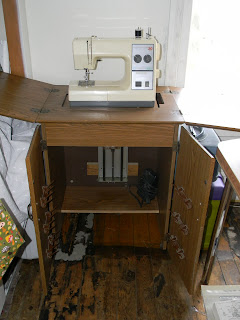 I have been looking for one of these, but they are usually so expensive that I pass on them. This one was only $19.99 and came with a sewing machine! Now I am completely loyal to Brother sewing machines, but this one looked like it was in good shape and came with the cabinet. It is a Kenmore, and the only thing wrong with it appears to be that it could really use a good cleaning. All the functions work well and it sews great! Perfect for the kids to sew on, since I have three kids who want to sew and currently only one machine I am willing to let them use.
This inspired me to look for a new table to sew on, which I found at another thrift store. It wasn't as cheap as I would have liked, but it did come with chairs. I got the store to keep the chairs and they knocked off fifteen bucks.
Having all this new furniture inspired me to rearrange the sewing room (again). 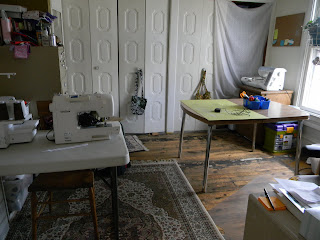 It is so clean and organized now that I haven't actually been able to sew anything yet. But that's okay because on Thursday it was Isaac's turn for the fever. Although Henry was better, I still had nurse duty all day. I am thankful that my kids are incredibly easy when they are sick. And that the library is stocked with DVDs that we can borrow for free.

WHat a delightful room!

Wow! I'd love a sewing cabinet so I might actually USE the machine I have.

Well done on a great find!
I like the sound of a weekly sewing group. That'd be fun. :)

I'm enjoying having a look at your blog. I'm following you now, too, from the TOS Crew.

Have a lovely weekend! :)

Sorry .. just read you'd like a link to track back.