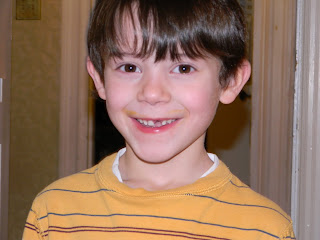 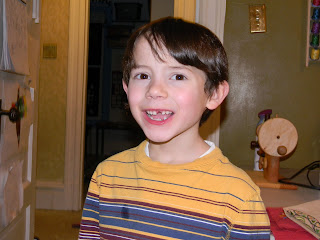 This new smile was kind-of forced. Okay, it was really forced. Picture this: James is sick with fever for several days. He is laying in my bed in complete misery when he manages to croak out, "Mama, my tooth came out." Now this fever has been weird. We are talking swollen ears and nose bleeds weird. So when he said his tooth fell out I wasn't really surprised. I was open to anything at this point.
Turns out the tooth was loose and he had been wiggling it while laying in complete feverish misery. Well, the announcement of the lost tooth reminded Isaac that the dentist had stated that several of his teeth were starting to come loose and he would be losing them soon. The dentist appointment was over two weeks ago and it Isaac got started making sure that "soon" equaled "now."
Sure enough, in just over an hour he had wiggled that tooth out. Which reminds me that the tooth fairy has double duty tonight and needs to start searching for some cash.
Posted by Modest Mama at 10:19 PM

I love new smiles like this. And this reminds me. The "Tooth Fairy" needs to make a visit to our house tonight. ;-)

Those are some awesome pictures! My son varies between forcing teeth to leaving them until they fall out on their own. I hope James is feeling better now.
I am from the TOS Crew and am now following you. I'm looking forward to reading more of your posts. Please follow me and thank you if you already are! Have a wonderful week.
www.indoorgardenmusings.blogspot.com