Guess what tomorrow is?

Tomorrow is the Latrobe Area Home School Science Fair. It's just a little gathering of over 30 kids with extensive science projects that are judged and awarded prizes. Some kids have been working on their projects for months. Back before I had to endure the pregnancy from you-know-where I volunteered to coordinate, plan, and run the science fair. I did it last year, and it turned out really well. Of course last year I didn't have to endure over six months of almost daily throwing up. But I still thought I could handle this. It's all in the planning.
Fast forward to the beginning of last week. James is almost done with his science fair project because Michael is helping him. Isaac, well... we had an idea what he was going to do. Then illness strikes boy number three. Then boy number two. Then the mama. Then the papa. Then the girl. Only the boy who is finished with his project is spared this illness. Go figure!
We have managed to get Isaac's experiment done. And some of the write-up. Thank goodness that the fair is in the evening and we can work our way through the day hacking and sneezing to get the project board completed. 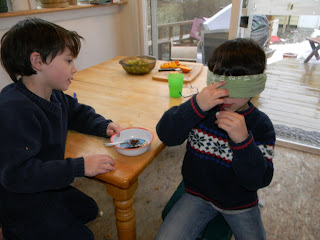 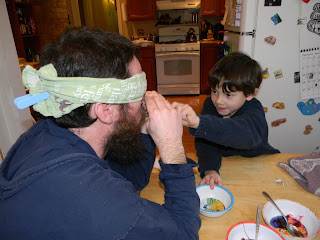 Check back tomorrow or Friday to see photos of the fair and find out how it went!
Posted by Modest Mama at 7:24 PM