Funny or not so much so? 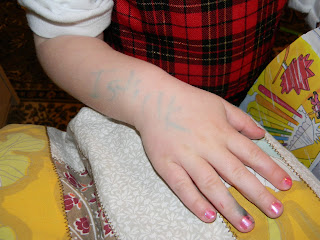 We were at a gathering where Margaret acquired a not-so-pleasant smell in her pants. One of the children at this gathering wrote the message "I stink" on her arm. It is faded now after two major attempts to scrub it off.
At first I thought this was hilarious. Especially since we didn't notice until the next day. But one of my boys pointed out that it really wasn't nice to write that on someone's arm, especially when that person is in the process of becoming potty-trained and can't really do anything about smelling bad at times.
Maybe it is mean of me, but I still chuckle a little when I think about it.
Posted by Modest Mama at 8:43 AM

Well, I wouldn't like it. I'm too much of a melancholic at heart and I'd think that other kid is pretty mean. :(

Ha! Humor is insensitive, isn't it?