The date that the newest biological Krom is due to arrive! 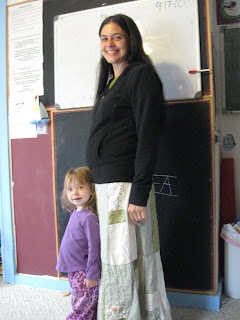 This pregnancy has been the worst so far. I was completely unprepared for the intensity of the nausea and the frequency of the vomiting. It got so bad that at one point it was recommended that I check into the hospital for fluids. I didn't have to go, and instead got on a miracle drug called Zofran. I have never been on medication for morning sickness, although I have always been really sick in the first trimester.
Zofran worked wonders for my sickness. I was able to leave the bathroom floor, and actually function at a near normal capacity. Although I was still throwing-up often, I really didn't feel sick anymore. I did receive a small amount of criticism about being on the drug. Well-meaning people who did not think I was making the best choices for my body or my baby. After all, tons of women "tough it out" with their sickness without any intervention.
Something I noticed about these people is that they did not have any pregnancies, or they did not experience morning sickness with their pregnancies. And I am not talking about the occasional sick feeling. I felt sick 24 hours a day for over seven weeks. I would dream about being sick while I was asleep. Sometimes I would vomit 15 to 30 times a day. I have a black hole in my memory from the end of July until the beginning of this week. Our Idlewild passes went unused for most of August, Keystone Lake was forgotten. My main objective was to get through the day.
As I begin to surface from this sea of nausea, I realize how many people helped me survive. My neighbor brought over PB&J's when Mike was away and I couldn't get out of a chair without vomiting. Allison often took charge of providing for my kids and household. Michael took over all of my duties, as well as his own, and all of this in the middle of a kitchen remodel, and preparing to return to SVC for the school year. My mama and Grandmother cleaned and cleaned and cleaned some more while they visited. Many friends prayed for my recovery and called to check-in.
I will be 12 weeks pregnant tomorrow. I am not 100%, but I am definitely better. I have only taken one pill since Monday. Growing a human is hard work. Sometimes during the last seven weeks I wasn't sure that I would make it. At my midwife appointment we were able to hear the heartbeat for the first time. "There's definitely someone in there!" my midwife announced. Yes, there is. And that little person has been worth every second of the last seven weeks.
Posted by Modest Mama at 9:43 AM

I'm sorry you've had such a hard time. I'm glad things are starting to get better! We have been praying for you every morning!

Hang in there! It won't be long until you'll be holding a new little bundle of joy!!!

Congratulations on your pregnancy!

You have my full support in taking Zofran. I had hyperemesis with my first two pregnancies and I understand how incredibly debilitating it is. And it leads to such depression. A good book I read was "Beyond Morning Sickness." Many women abort their babies because of debilitating hyperemesis.

I found Zofran didn't work for me very well in comparison to homemade Bendectin. I did not receive support from my home birth midwife in taking Bendectin and I knew the whole time that she did not believe how bad my illness was. In my second pregnancy, I took Bendectin three times daily and still vomited all day long, although it was better than without the drug. It caused real depression because half the ingredient of Bendectin is Unisom--a sleeping pill I had to take all day long and still take care of my toddler!

In this pregnancy, it has been much better. After two times around, I had done a lot of spiritual work before this pregnancy to ready myself for what I thought was coming. I have been so grateful that this hasn't been nearly so bad. I've been taking only one dosage of Bendectin at night. I quit it at ten weeks for 24 hours and the vomiting began right away for two days. So, I'll be staying on it for a while yet. I still feel nauseated most of the time, but it's not anywhere as bad.

You can read in various places online about Bendectin. It was accused of causing birth defects, like thalidomide, and the manufacturer could not afford to defend it in the litigous USA, so pulled it from the market. It remains available in every other country. It is a combination of Unisom (doxycline, so be sure to check the box b/c Unisom comes in various forms) and vitamin B6. Because of the lawsuits, it has become the most studied drug for use in pregnancy and has been shown to be very safe. Since it was removed from the market, hospitalizations for hyperemesis has skyrocketed (I forget the statistics).

P.S. I can't really swallow pills during pregnancy (thank goodness Unisom pills are so tiny). So I take my B6 in the liquid form by Carlson Laboratories. And since my last pregnancy, a gummy prenatal vitamin has been invented! Last time around, I simply couldn't take prenatal vitamins, much to the consternation of my midwife. I'd just vomit them up every time. This time, I am taking Gummy Prenatals by VitaFusion, as sold at Target. And I take them at night when I can keep them down better.

My vitamin D is low, as usual, and it is available in liquid form too. Yay for that.