We have been studying Early American Settlers for almost seven weeks now and decided to have a Pilgrim dinner. Some of the differences in mealtime then as opposed to now is the role of the children at the meal. Children served the adults. They did not sit during the meal. They only spoke when spoken to. This was obviously difficult for my kids and so they followed these rules for only about five minutes. James, being the good sport that he is, continued with it throughout the meal. Here are some photos from our event. 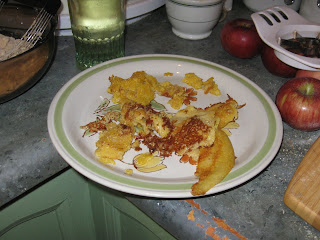 These Johnny Cakes look bad but they sure tasted delicious. 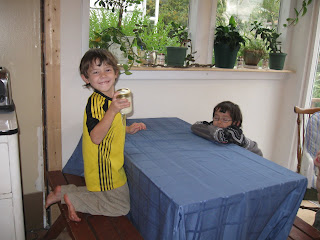 Making the butter for the dinner. I guess that is a bonus of drinking raw milk. There is always a lot of cream on the top for things like butter or icecream. 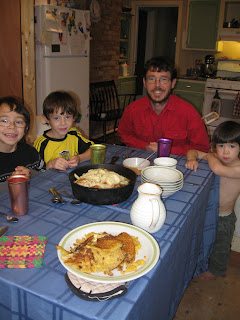 Here we are getting ready for our Pilgrim feast. In those days people ate out of a communal pot in the center of the table using their fingers. We were going to do that but I got paranoid about sharing germs and so we still used our fingers (for the most part) but we each had our own bowl to eat out of.

Looks like fun! It's amazing how much things have changed. For instance, how eating out of a communal pot makes us cringe :) I would've used separate bowls for the reinactment, too!