There really isn't a lot going on around here that is blogworthy. We are way behind in schooling (who isn't?) and so we are spending a lot of time hitting the books. We've had some nice sunny days, which makes being in the school room so nice since it is such a bright sunny room. 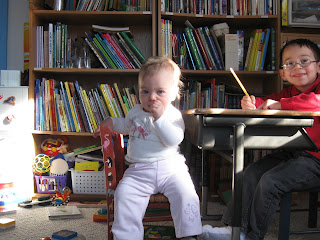 Margaret likes to climb up into chairs and sit in them. This never ends well for her. She either tips over in the chair, falls out of the chair, or sits there and cries for someone to come and get her out of the chair. No one ever does, thus forcing her to either tip over the chair or fall out. She will then crawl to wherever I am, and after she has my full attention , she will proceed to throw a tantrum. I am guessing this is the same tantrum she would throw if I had witnessed her fall out of the chair. 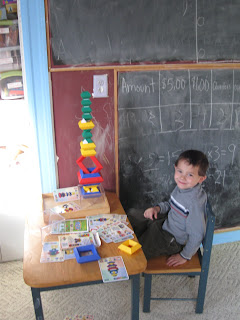 There is a renewed interest in the wedgits around here. Lots of spaceships and missle-launching aircraft have been created. Every spaceship/aircraft created comes with a free five minute demonstration on the various parts of the ship and how it flies (yawn). These demonstrations are in fact so important, that even someone in the shower must witness the demonstration right away. I think there is some sort of hidden wedgit alarm that alerts the children that I am in the shower and in need of a wedgit building demonstration. Moving the creation to the bathroom almost always guarantees that some, if not all, of the craft will fall apart- thus requiring not one, but two lengthy demonstrations: one on wedgit spaceship/warship building, and one on flight patterns. And no, locking the bathroom door does not help. Persistant knocking and the calling of "Mama" during a shower is way more annoying than showering with the curtain open while I "ohhh" and "ahhh" over their masterpieces. Henry has build an apartment complex that he would not live in. "Because I am too big to live in a wedgit!" Silly me.