In August of 2007, Isaac was diagnosed with HSP or Henoch-Schonlein Purpura which is a virus that affects the blood vessels and usually the kidneys. Isaac was really sick when he first got the virus, but since then he has just been his usual self. We were told that total recovery time could be up to two years! 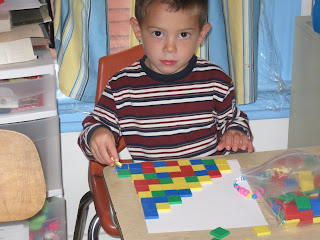 About three days ago Isaac developed a fever and it followed a similar pattern to the fever he had when he was first diagnosed. It would come on strong, but he would have long periods of time with no fever and then it would come on strong again. So I took a cup of his wee to the doctor today and it showed that the virus may be making a comeback.
There isn't any kind of treatment we can do for Isaac. This virus isn't contagious, so we don't have to worry about the other kids getting it. But, it can damage his kidneys and stomach. So now it's a waiting game. We are waiting to see if the lesions appear on his legs again. We are waiting to see how long his infrequent fevers last. We are waiting to see what his next pee test shows.
We aren't really that worried about it because we have been living with this for the last 15 months. Half the time I don't even remember that this mean virus lives inside my sweet boy. But I thought that I would put the word out that we would love some extra prayers for Isaac at this time.
Posted by Modest Mama at 10:09 PM

Wow, I had no idea. Please know that Isaac and the rest of your family are in our prayers. -Susan

Oh, sweetheart! You've got those prayers coming today and for many days... I had no idea.

It's really not that serious right now, but the potential for it to become serious is there. You wouldn't even anything was wrong. Really.