What has Isaac been up to?

Well, Isaac has really enjoyed preschool so far this year. His favorite things to do are math and painting. After he completes a narration, he usually likes to paint a picture to go with it. His narrations have really improved over the last month. Here is his latest painting, and I copied the narration under it. He tells me the narration and I write it down for his notebook. 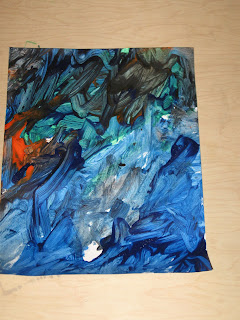 {Three Stories from Winnie the Pooh, story 1}. "There was a bear that got stuck. The bear's name was Winnie the Pooh. He went into a hoel and when he went to get out he got stuck. He was too big for the hole. They needed to pull him out. He popped out. Then he walked away."
In the painting you can clearly see the hole that Winnie the Pooh got stuck in. It is the white part near the bottom of the picture. 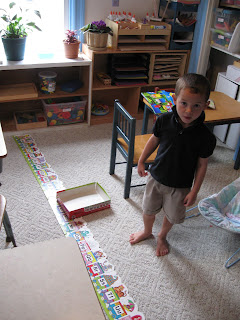 Isaac is also mastering identifying and saying the sounds of the alphabet. It is a little more difficult for him because we are learning all the sounds for each letter, instead of the most common sound. For example, for the letter "a" he learns to say "ahh, a, uh" He enjoys phonics, especially when he gets to learn a new letter. 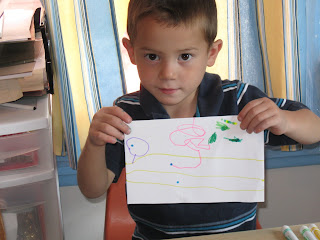 We are learning to draw using "Drawing with Children." I will write more about that later. Here is Isaac's interpretation of the Level 1 warm-up exercise using the five basic elements of shape. 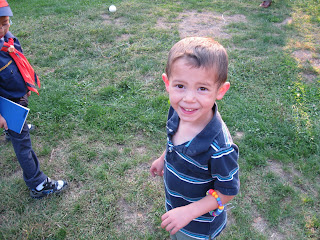 Here is Isaac just being cute and enjoying one of the few sunny and warm days we have left this year.