News Flash! Margaret is small for her age! 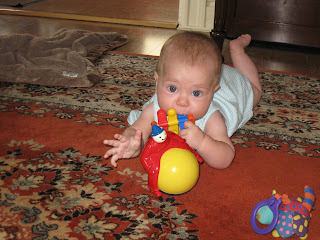 Okay, so Margaret had a well child check-up today and the doctor determined that she is small for her age. A little concerning for the poor doctor. Does she eat solid foods? Yes, she eats fruits and veggies and rice cereal two or three times a day. Oh, that often? Well, that is plenty. Does she nurse enough? She nurses six to eight times a day. That's good for a seven month old. Does she seem like a content baby? She is beyond content! Sometimes I forget that I have a baby. Hmmm. At 15lbs, 6 oz and 26 inches long, she is small for a seven month old. 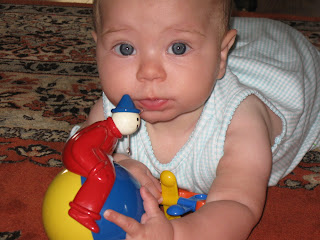 Well, this was comical to me in many ways. First, anyone who has seen Margaret knows that she is very well-proportioned. She is cubby, but not obese. She has some flattering knee-fat and I still haven't seen any sign of neck under the rolls from her chin. She also got James' cute baby-chipmunk cheeks.

Second, my kids tend to come on the "small" side. I have a 35lb, 41 inch tall six-year old. To have a "monster-sized" baby would seem a little out of place in this house.
I adore our doctor (who also happens to be one of my neighbors). In the end, she admitted that Margaret was very well-proportioned, and her growth is comparable to my other children. And she also said that Mike and I were "small people." [Sidenote: Lobby of OMSI, summer 1999. Hmmm]. The point is, that I could see a first-time or insecure mother picking up on the doctors concern and missing the end note that the baby is actually growing right on schedule. I could see a new mother really freaking out over having a smaller baby. Is this why there is a childhood obesity problem in the USA?
Posted by Modest Mama at 10:50 PM

I visited you at OMSI that summer, you were working there then, right? Man your hair was SO CUTE!! Haven is also small, and I don't even bother with the 'well child' visits anymore. I know my child is well, I don't need to pay a doctor $150 to tell me!!

Wow, I still miss the days of cradling Mary in my arms...she was like a delicate little doll compared to my boys. There's no joy in changing 40 lb. Peter's diaper.

What cute little Kroms! Okay, so I have to share my stats, too--just because it's a classic Krom-Ahern dichotomy!

We can't wait to see little Margaret in Nov.!

So true that the things docs tell you could make a new mom neurotic. There is such a peace in having been through it a few times. I have some good news. Peters MANY allergies are staring to subside and he has only a moderate milk allergy now. Peanuts, beef and potatoes are all on the okay list now. McDonalds here we come! He is still small. Monica, on the other hand, is a moose. She is over the 100% percentile and while I was elated for a time because my kids are always on the little side, I now have thoughts of my sweet little girl becoming obese!! You can't win!