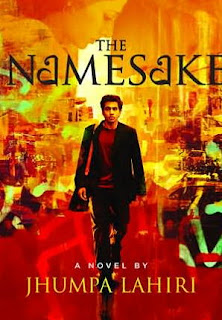 Last night Mike and I watched the movie: "The Namesake." It is based on a novel by Jhumpa Lahiri (seen above). The movie is about an Indian family that moves to the USA and raises their two children. The story focuses particularly on the oldest son Gogol.
Mike and I both thought this was a pretty good movie. It does have some racy bed scenes (what new movie doesn't?!?!), but the overall message and movie is good. I had seen a preview for this movie and the movie itself was a lot different than I thought it was going to be from the preview. A lot more background context was established and it focused more on the meaning of "family."

Michael and I both have interest in India. Michael spent time there after college, and I have always been facinated with the culture and religion- especially in the context of the roll of women. I think this movie exceeded our expectations. Due to the racy scenes and many adult themes, it is definitely not a "family movie night" movie. But if you see it at your local library or get it through NetFlix, it is definitely worth watching. Michael in particular says that he highly recommends the movie.
Posted by Modest Mama at 11:34 AM