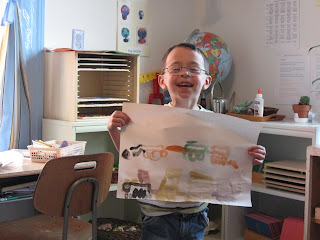 Kudos to James who has successfully completed "Prima Latina: Introduction to Christian Latin, Level 1." He is exactly six years and nine days old. When do they start Latin in mainstream school education? That's what I'm talking about!

In the picture he painted a train and wrote verb conjugations in each of the cars. In the caboose he wrote the Latin word for "The End" or "Finished."

Hot diggity. I hope Miriam takes to English as well as James has to Latin!