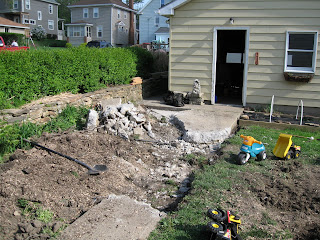 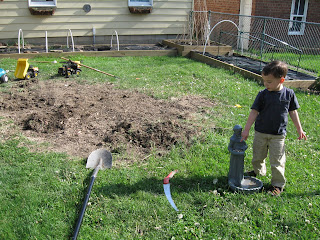 Do you ever get that "What have I done?" feeling? I am experiencing that feeling with our backyard right now. As some of you know, our backyard is fairly small. In order to maximize the space we have we are making some changes. Mike built some beautiful raised beds against the garage and chain link fence (which will be gone by summer's end). My dad is coming to help build a deck and we are going to re-route the path in the back from the middle of the yard to the side.

All these changes take work, and make a huge mess. Mike and the neighbor (who is also a Mike) are tearing up the concrete path with a sledge hammer. I assumed we would haul the broken concrete away, but that costs money and so we are going to see if we can use it elsewhere first. The path is a bit thicker than was orignally thought- in some places it is almost 12 inches thick. So it was suggested that we may have to haul some of it away after all, since it is producing a lot more broken concrete than we anticipated.

The enormous brown pit in the middle of the yard was once a lovely maple tree that the previous owner got annoyed at and hacked off. She left a three foot high stump for us to deal with. The stump guy came and had to dig up most of the middle of the yard to get at the roots. This was after the stubborn stump broke two of his machines and he had to leave us with half a stump for three weeks until he could get some back-up equipment. Now there is only a brown pit that we replanted with grass seed. We shall see if it works out.
Posted by Modest Mama at 11:32 PM

Concrete suggestion: use the broken concrete for the base (instead of gravel) of the new path. It will take some effort to pound the concrete into small enough chunks, but there will be some after just beating on it with the sledge hammer. You might be able to get the boys to help out with smaller hammers :)

Yeah dude, you could dig the new path really deep and use the dirt for the raised beds, then put in the concrete OR (man I just had a brainstorm) put the concrete chunks under the new deck to stop grass from growing up! Just put some weed barrier down first, then throw all the old concrete there! Totally. The yerd is really coming along!