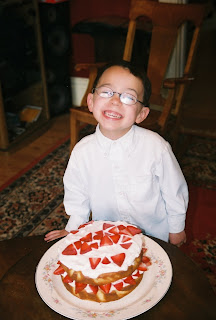 CNN recently ran an article on the rising costs of children's birthday parties and the pressure some parents feel to spend thousands of dollars (literally) for the celebration. We are not talking about the sacred coming of age parties like the First Holy Communion, Confirmation, etc. I am talking about regular "Johnny turns eight" parties. The article stated that some birthday parties rival weddings in scale and price. The birthday party industry is now making millions of dollars. For example, you can rent the FAO Schwarz toy store in NYC for your party. The base price for the party: $25,000.

I am having one of those "Why didn't I think of that?!?" moments. But this time, I am glad that I didn't think of it. BECAUSE IT IS WRONG! There is something incredible selfish about spending so much on an ordinary celebration for a child. I have been to NYC several times but I have never made it to FAO Schwarz. I am sure that it is nice and all... but we are talking about $25,000! The cost of a down payment on a house. Several years worth of food for a family of six. A college education at some state schools. All these things equal the cost of one birthday party. Not even parties every year from one to eighteen. Just one year, one party.

What happened to making it special at home? Inviting some friends, playing a game or two, cake, candles, the off-tune harmony of the birthday song. When did these things become not good enough for a child? Out of neccessity, some of our friends have to have the party away from home. I know for a fact that they do not spend thousands when they do. I would be surprised to learn that they spent over $200.

When I was growing up I would get a party every year. Some years they were at a local pizza dive that had video games. One time it was at McDonald's. Most times it was at home. Do I remember the birthday because I was there, or do I remember the photo in the album of the party? If my parents had rented a toy store for my birthday I probably would remember that. But who knows if I would have liked it more than the ones at home. It would have stood out more because it was unique. But I am sure that most of the kids who are having the $25,000 toy store party are having a blow out of equal value the following years.

James recently had his sixth birthday. He wanted to choose his theme and so we went to the local party store and looked at party stuff. He choose Fighter Jets and so I spent $20 on Fighter Jet streamers, plates, napkins and party favors. I got some little airplanes at the dollar store and spent $12. He wanted a strawberry cake and fruit kabobs: $15. We got juice boxes for the guests: $10. We made icecream in our icecream maker: $10. The party was during dinner time so we ordered pizza: $65.


At our party we spent about $150 (I know there were some expenses I am forgetting). That may seem like a lot to you. Let's consider the guest list. There were ten children, nine adults, and three babies. We had a birthday party and fed 19 people dinner for under $150. That's pretty remarkable. I might have spent an equal amount if the party had been at a local pizza dive, and the mess would have been a great deal less for me. But there is something special about having important celebrations (you only turn six once) in the location that your life happens. This is the house where we live and love God. The boys met Margaret for the first time in this house. We are about to celebrate living one year in this house. This is the place where we are a family and where we share family experiences.


In case if you were wondering, James had a great time at his party. He had a strawberry cake with a "missile" on it made out of strawberries. The guests made paper airplanes and we "flew" them by placing them in the center a giant parachute that the children flapped. I checked the parachute out from the library resource center. They donned blind folds and tried to find a toy airplane in a Rubbermaid container filled with packing peanuts. We even had a homemade version of "Pin the pilot on the cock-pit" which we forgot to play because the children were so busy being with each other and riding bikes and playing hide and seek, etc. Experiences that would not have occured at the local pizza dive.

Sometimes doing less for your child is actually doing more for them.